Jointly with researchers from Germany and France, researchers of the Paul-Ehrlich-Institut have generated induced pluripotent stem cells from one health individual, one patient with Aicardi-Goutières syndrome, and one patient with Renpenning syndrome. Proteins play a role in both diseases, which are also important for the immunological recognition of the human immune deficiency virus (HIV). With iPSCs and derived cell types, new insights can be gained into the syndromes and the human immune system in the fight against HIV. The results of this research are reported in Stem Cell Research in three different contributions published from December 2019 to January 2020. 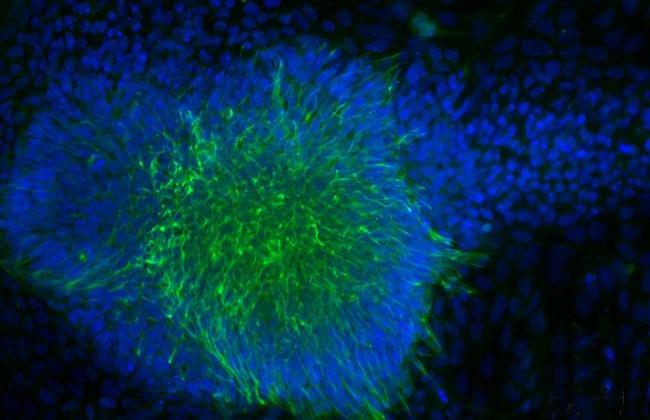 The biological processes in the human body are complex – thus, decoding disease-inducing processes are challenging. Diseases with a contribution of the immune system are often difficult to research. An important method of identifying the causes is the comparison between healthy and diseased cells. For this purpose, researchers of the Paul-Ehrlich-Institut, Federal Institute for Vaccines and Biomedicines, have generated so-called induced pluripotent stem cell lines (iPSCs) from one health individual and two patients with different genetically linked diseases. iPSCs are multi-talents, because they can develop into a variety of cell types. Thus, they are a useful tool in studying cellular processes in healthy and diseased individuals.

The patient from whom the PEI researchers under the management of Dr Renate König, head of section "Cellular Aspects of Pathogen-Host Interactions" generated iPSCs is suffering from Renpenning syndrome. The disorder is a rare congenital x-chromosomal disease characterised by mental retardation, microcephaly, short stature, and hypogonadism. Mutations in polyglutamine-binding protein 1 (PQBP1) are the cause of this disease. The second patient has Aicardi-Goutières syndrome (AGS). AGS patients show variable clinical manifestations including intracranial calcification, brain atrophy, abnormalities of the white matter, and a pathological increase in white blood cells (leukocytosis) as well as upregulation of the formation of type-I-interferons. Type-I-interferons have an immune-stimulating and, among other things, antiviral effect and belong to the group of cytokines. Seven genes were associated with AGS including the gene for restriction factor SAMHD1 (sterile alpha motif and histidine-aspartate (HD)-domain-containing protein 1). Restriction factors inhibit a virus infection and virus replication in body cells – in this case also the immune recognition of HIV-1.

So why exactly are the researchers interested in these two diseases? Both diseases are characterised by a participation of the immune system. In addition, SAMHD1 and PQBP1 are not only important for the above mentioned disorders but also play a role in the immune recognition of HIV, the human immune deficiency virus. HIV is a focus of research of this working group at the PEI, which has set itself the task of studying the interactions between the pathogen and host cells.