Our genome carries mobile genetic elements, so-called LINE-1 (L1) retrotransposons, which spread throughout the chromosomes. Such new L1 insertions can contribute to the development of liver cancer, which is frequently caused by chronic infections with the hepatitis-B virus (HBV) or the hepatitis-C virus (HCV). As researchers from the Philipps University of Marburg and the Paul-Ehrlich-Institut could demonstrate, HCV increases the gene expression of endogenous L1 retrotransposons in liver cancer cells. HCV proteins bind to L1 proteins and transport them to regions in the cells where HCV particles are assembled. PLOS Pathogens reports on the results in its online edition of 19.04.2021. 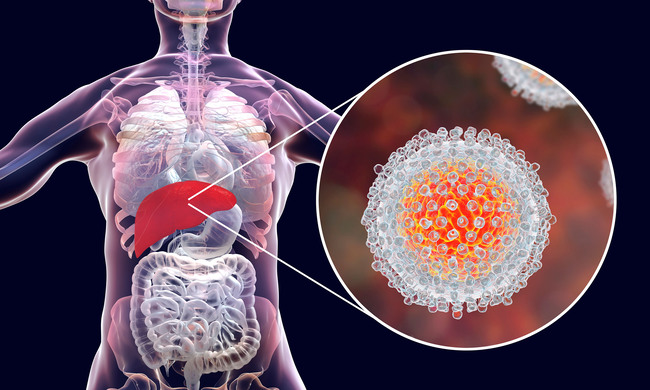 Approximately 35% of the human genome cover sequences that were generated by the propagation of so-called retrotransposons. The protein machinery necessary for this propagation process is encoded by approx. 80-150 copies of autonomous retrotransposons, which belong to the family of Long Interspersed Nuclear Elements 1 (LINE-1, L1). They cover about 17% of the genome. It is known that the mobilisation of these L1 elements can damage genomic integrity by generating insertional mutations which can lead to cancer development. Activity and proliferation of L1 elements in the genome is regulated by numerous cellular control mechanisms, which, for example include the methylation of certain nucleotide sequences of L1 elements.

Potential interactions between viral infection and endogenous L1 activity or possible consequences for viral or retrotransposon replication have barely been studied to date.

In collaboration with Prof. G. Schumann, Division Medical Biotechnology of the Paul-Ehrlich-Institut, scientists of the Philipps-University of Marburg studied interactions between L1 elements and the hepatitis C virus (HCV). The researchers demonstrated that HCV infection of liver cells significantly increases the expression of genomic L1 elements and its proteins in cell culture. The L1 protein was relocated by an interaction with HCV proteins to assembly sites of HCV particles that are in close proximity to lipid droplets. Surprisingly, HCV infection restricted L1 mobilization. At the same time, an increase in the number of L1 protein-containing stress granules was observed in the cytoplasm.

Thus L1 proteins are trapped and consequently no longer available for the propagation of L1 elements, which explains the observed inhibition of L1 mobilization.

These studies provide first insights into the molecular interplay between endogenous mobile (transposable) elements and exogenous viruses, which, in the case of hepatocellular carcinoma have both been demonstrated to represent factors involved in disease progression.