Research at the Division Medical Biotechnology 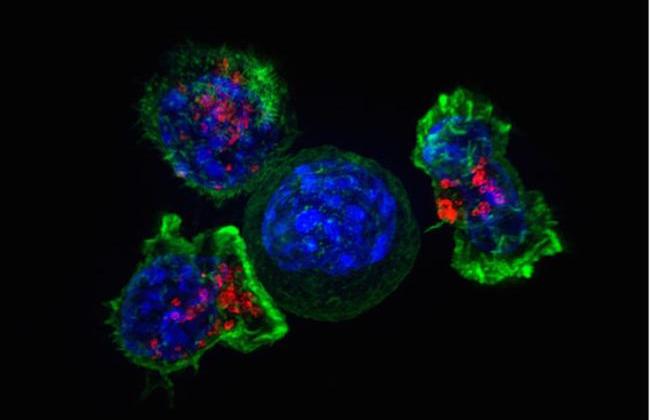 The division has implemented a concerted research program addressing basic biological and biotechnological principles underlying the development of ATMPs with the goal to aid their translation into the clinic. As project partner of the German Consortium for Translational Cancer Research [Deutsches Konsortium für translationalen Krebsforschung (DKTK)], we strive to identify and solve regulatory challenges associated with personalized therapies and ATMPs for the treatment of cancer. Severe side effects often hamper successful implementation of ATMPs in the clinic, and represent significant challenges to both developers and regulators. To evaluate the risks associated with ATMPs, we develop test systems

Interactions between genomic parasites such as viruses, transposable elements (TEs; jumping genes) and transgene vectors with host cells (which include their integration into the host cell genome) can have negative consequences for cellular homeostasis, and thus for the quality and safety of gene therapeutics and cell-based products. To improve safety and efficacy of ATMPs, we investigate the interactions between human endogenous TEs and their host cell, the consequences of endogenous TE mobilization for genomic destabilization, host gene expression and biological safety of therapeutically relevant human pluripotent stem cells as well as for the development of human disease (Schumann Lab). In addition, we study (epi)genetic pathways contributing to the mobilization of endogenous transposable elements and chromatin features determining the genomic integration profiles of endogenous TEs (Schumann Lab) and exogenously supplied genetic vectors (Ivics Lab).

Xenotransplantation of animal cells, tissues or organs to humans can help to overcome the critical shortage of allogeneic donors. To contribute to risk assessment regarding cross-species disease transmission, we focus on the biology and pathomechanisms of endogenous retroviruses in animals (Tönjes Lab). 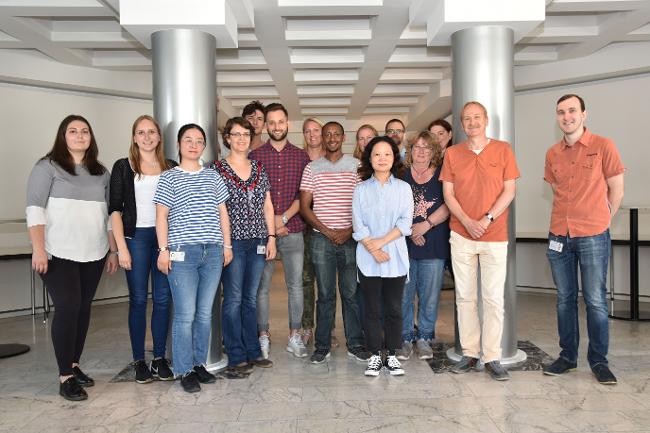 Transposons ("jumping genes") are discrete segments of DNA that have the distinctive ability to move and replicate within genomes across the tree of life. Transposons offer a new model to study DNA recombination as well as host-parasite interactions in higher organisms. Transposons are also natural gene delivery vehicles that are being developed as genetic tools.

We have reconstructed an active transposon from DNA sequence fossils found in fish genomes. Sleeping Beauty not only represents the first DNA-based transposon ever shown to be active in cells of vertebrates, but the first functional gene ever reconstructed from inactive, ancient genetic material, for which an active, naturally occurring copy either does not exist or has not yet been isolated. Technologies based on Sleeping Beauty gene transfer have been revolutionizing genomic manipulations in vertebrate species.

Our laboratory is following the strategy of studying the mechanism of transposition and its regulation and translate this knowledge to derive transposon-based genetic tools for genome manipulation or for gene therapy.

Endogenous retroviruses (ERV) form integer genomic compartments of all organisms. ERV are inherited vertically from generation to generation. Endogenous retro-proviruses represent cellular genes that were stably transferred to the germ line of their hosts (e.g., humans, pig or sheep) at some point during evolution, most likely by infection.

We are working on the characterization of biologic functions and putative pathologic properties of members of the ERV family. The human genome consists to approximately 8% of ERV sequences, the genome of pigs also contain porcine endogenous retroviruses (PERV). The current focus is on the analysis of the biological characteristics of those full-length proviruses which show no apparent genetic defects.

For xenogeneic cell therapy and xenotransplantation the risk of transmitting foreign micro-organisms to humans is currently believed to set up the main hurdle apart from immunologic and physiologic incompatibilities. The use of genetically modified (transgenic and knock-out) pigs as organ donors for human recipients mediate the transfer and adaption to humans of replication-competent gamma-type PERV. We have initially characterized functional PERV from large white pigs (German landrace) on the molecular and genomic level. 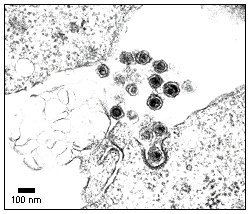 Assays and reagents are being developed that are suitable for the improved detection and characterization of integrated PERV sequences including transmission and infections. Two human cell lines support PERV replication, which raises concerns. Fortunately, productive chronic infection of cultured human lymphocytes incubated with PERV could not be observed in our hands.

In addition, for whole pig genome and transcriptome analyses, a custom derived 8-plex 60 k Agilent microarray consisting of 26.967 porcine targets as well as diagnostic sequences for PERV and several human (trans-)genes was established.

Overall, we evaluate the microbial infectious risk in the course of screening of pigs that are designed for xenotransplantation of cells, tissues and organs. Particularly multi-transgenic pigs are checked for all known microorganisms as well as unknown agents by microarray, RNA-Seq and/or multiplex PCR as well as by specifically designed assays.

Research in our laboratory originates from an interest in interactions between human LINE-1 (Long Interspersed Nuclear Element-1, L1) retrotransposons representing the currently functional and active group of autonomous non-LTR retrotransposons in the human genome, and their host. We are investigating the consequences of L1-mediated retrotransposition for genomic destabilization, expression of host genes and diseases associated with L1 activity in human pluripotent stem cells.

Although the human genome harbours ~106 L1 copies covering ~17% of the genomic DNA, only a subset of ~80-100 L1 elements is functional and retrotransposition-competent. L1 elements replicate via an RNA intermediate using a ‘copy-and-paste’ mechanism. The L1-encoded protein machinery is responsible for the mobilization of L1 elements in cis, but also for the trans-mobilization of non-autonomous human non-LTR retrotransposon groups like SINEs (e.g. Alu) and SVA elements (Figure 1). 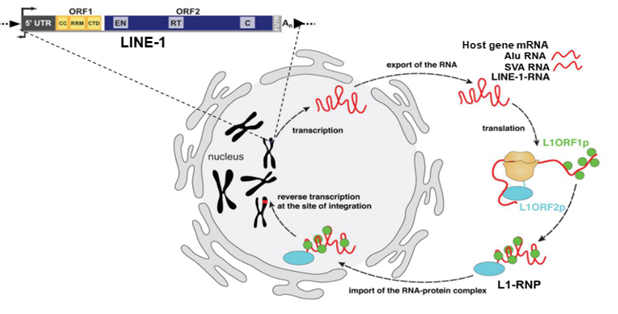 Random cellular mRNAs are also mobilized by L1-encoded proteins resulting in processed pseudogene formation. Taken together, the generation of approximately 34% of the current human genome is a consequence of the activity of L1 elements. Human L1 was found to be active and mobilized in the germline, during early development and the formation of the central nervous system and later during adult neurogenesis. Insertions into coding regions were shown to cause human disease. Increased retrotransposition occurs in cancers and correlates with aging, stress, DNA damage, and telomere shortening.Human L1-mediated retrotransposition was demonstrated in numerous transformed somatic cells in culture, and in human pluripotent stem cells (hPSCs) including embryonic (hESCs) and induced pluripotent stem cells (hiPSCs) (Figure 2).

Since hESCs and hiPSCs can self-renew indefinitely and can be converted into any somatic cell type, both stem cell types are used to establish models for diseases and development and hold great promise for substitutive and regenerative therapies. However, genetic and epigenetic aberrations including L1–mediated retrotransposition events that occur during reprogramming and in vitro expansion in hiPSCs and during cultivation of hESCs, may hinder their use in regenerative medicine because they could affect their identity and differentiation capability, and could elevate the risk of tumorigenesis upon implantation of hPSC-derived differentiated cells.

We investigate the impact of endogenous L1 activity on genomic and epigenetic integrity of hPSCs and evaluate if the activation of L1 expression and mobilization affects any potential use of hPSCs in cell therapy by increasing the tumorigenicity risk, limiting differentiation capacity or causing any potential functional deficiencies in the differentiated derivatives.

Beyond their influence on genome evolution on the species level, L1-mediated retrotransposition reshuffles individual genomes in many different ways, a process which is often associated with the induction of local genomic instabilities. L1 insertions into genic functional sequences may be full length or 5’-truncated or contain inversions and can alter gene expression (e.g. by insertional mutagenesis). To date, ≥120 cases of different genetic disorders (e.g. haemophilia, cystic fibrosis, neurofibromatosis etc.) and tumorigenic diseases (e.g. breast cancer, colon cancer, etc.) were shown to be the consequence of such local genomic instabilities caused by L1, Alu and SVA de novo insertions. Roughly 20% of all L1 insertions are associated with structural rearrangements including deletions or insertions ranging from 1 bp to more than 130 kb.

So far, L1- and Alu-mediated non-allelic homologous recombination ( NAHR ) events were shown to be the cause for at least 73 reported cases of genetic and tumorigenic diseases . Additionally, the endonuclease activity of ORF2p has been shown to be associated with the induction of double-strand breaks in mammalian cell lines inducing various cellular responses including apoptosis, cellular senescence, cell-cycle checkpoints, and DNA repair responses.

Impact of L1, Alu and SVA Activity on Gene Expression

L1-mediated retrotransposition of L1, Alu and SVA can affect expression of nearby genes through several mechanisms: 1) Intronic L1 sequences interfere with transcription elongation of the host gene due to the reduced ability of RNA polymerase II to read through L1 sequences. 2) The retrotransposon can provide new splice sites that can promote exonization or alternative splicing, and 3) they often carry accessory polyadenylation signals that induce transcriptional termination. 4) Sense and antisense promoter of L1 elements are often used to initiate sense or antisense transcription of surrounding host genes.

Figure 1: L1 retrotransposition cycle. A functional L1 element is transcribed and its mRNA (red) is exported into the cytoplasm, translated, and L1-encoded proteins (L1 ORF1p, L1 ORF2p) bind to their own mRNA (cis preference) or, occasionally Alu or SVA RNAs, and form ribonucleoprotein (RNP) complexes which are reimported into the nucleus. Subsequently, L1 RNA (alternatively Alu or SVA RNA) is reverse transcribed and the cDNA is inserted into the genome by a mechanism termed target-primed reverse transcription (TPRT). Frequently, reverse transcription fails to proceed to the 5’ end, resulting in truncated non-functional L1 de novo insertions. Source: PEI